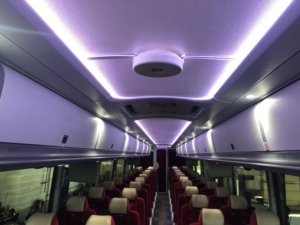 The fixtures are mounted inside the bus and continuously sanitize air with UV light.

August 12, 2020 – The Cleveland-based Barons Bus is the first U.S. motorcoach operator to install FAR UV Lighting in its vehicles.

“We have the ability to continuously disinfect while the bus is going down the road. That’s very different from the sprays and everything else, just because you have to wait until people get off so you can respray versus this light has the ability to continuously disinfect as the bus traveling down the road,” Barons Vice President Patrick Goebel said. “It’s also safe for human skin and human eyes, which is different from the other UV lighting, as well. So that’s really what caught our attention.”

The lighting is a groundbreaking technology that effectively kills up to 99.9% of viruses and bacteria, including SARS-CoV-2, the virus that causes COVID-19, in occupied spaces, according to PJ Piper, CEO of FAR UV Technologies – a Kansas City, Missouri, company. The fixtures are mounted inside the bus and continuously sanitize air with a UV light that does not produce or leave behind harmful chemicals, Piper said.

He notes that FAR UV lighting has been used to sanitize healthcare, defense and several other facilities so extending this to transportation applications was the next logical step to provide more protection in our occupied spaces. Krypton light disinfection (222nm wavelengths) provides practical and effective countermeasures for the pathogens leading to infectious disease in occupied spaces, according to Piper.

A study by researchers at Columbia University Medical Center shows that Krypton light does not penetrate the skin or eyes, a common concern about other UV-C lamps, which are known to be harmful to humans. Though its effectiveness against viruses and bacteria is well-known, research has shown UV-C light at 254nm wavelengths cannot sanitize human tissue or occupied spaces without potentially causing adverse effects and long-term damage.

Research by other academic research institutions has supported those findings of the new 222 nanometer ultraviolet light technology, according to the FAR UV Technologies website. The company has also done research under NASA and military grants. When the COVID-19 pandemic hit, the company saw the potential of using the technology to eradicate the novel coronavirus and mitigate the negative impact of communicable illness between people in shared spaces.

Lighting location
Barons President Tom Goebel said installing the devices on buses takes about an hour. The company reached out to MCI to decide the best place to locate the lights, which resemble smoke detectors.

The technology is being installed in Barons’ 51 motorcoaches.
“MCI has been very supportive. They worked with us very well and are excited to see it out there. Everybody’s coming up with all kinds of things trying to control this virus, but I really think this is the best way,” Tom said.

Barons Bus has created flyers to educate customers about the technology and how it is different from other UV technology.

$2,500 per coach
The technology is being installed in Barons’ 51 motorcoaches. The cost, including installation, for one vehicle, is about $2,500. The company is also working with the state of Ohio to install Krypton lights in its fleet of school buses.

“We looked at making our drivers and customers safer and bringing the demand back for our business because customers would feel safe taking our buses. We really can’t put a financial number on this,” Patrick said. “We are also putting UV lighting in our blower systems from MCI to give a double kick. So we’ll spend close to $300,000 when we’re done with the cost of the product and maintenance.”

He is inviting other motorcoach operators to reach out to him to learn more about how the technology works, adding that Barons doesn’t have a financial stake in the lighting company nor will it benefit from future sales of the product to other operators.